Since 2013, the region of Wadi Abu Dom has also been explored using remote sensing technology; in particular, satellite images accessed via Google Earth have been employed. In addition, aerial photographs have been examined and analyzed – for example, those in the archive of the Sudan Survey Department, which were taken during the 1970s by manned aircraft. 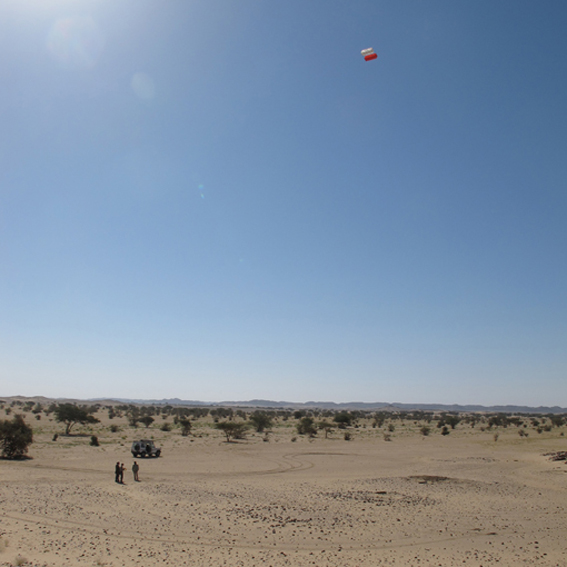 In spring 2015, low altitude unmanned aerial vehicles were deployed. Some parts of the Wadi Abu Dom were explored by an electric tiltrotor quadrocopter and a paraglider equipped with a two-stroke engine. The focus of these explorations was on regions where satellite images and historical aerial images are not available in a resolution sufficient for archaeological purposes. The single images were assembled into strips and geo-referenced.

A crucial aspect of remote sensing is the so-called ground-check – the verification on the surface of the results from analyses of air and satellite images. Up to now, it has proved difficult to differentiate between ancient and recent remains of camps and settlements on the basis of data obtained at currently available standards of image resolution.

High-resolution images taken at a low altitude by a camera born aloft by a kite have been helpful for supplementing information obtained by remote sensing, but this is only possible for on-site use.  Such images can be assembled and geo-referenced on the computer to provide a basis for small-scale 3D digital models of the territory.