The site of Umm Ruweim is situated in the northwestern corner of El Rum oasis. Three different ancient building complexes are found here: Umm Ruweim 1 with a central building and two concentric casemates, Umm Ruweim 2 consisting of an square shaped enclosure and some internal buildings made of mud bricks, and the small building of Umm Ruweim 3 at the edge between the flood terrace and the wadi bed.

The buildings of Umm Ruweim are excavated since January 2020, starting with Umm Ruweim 1. 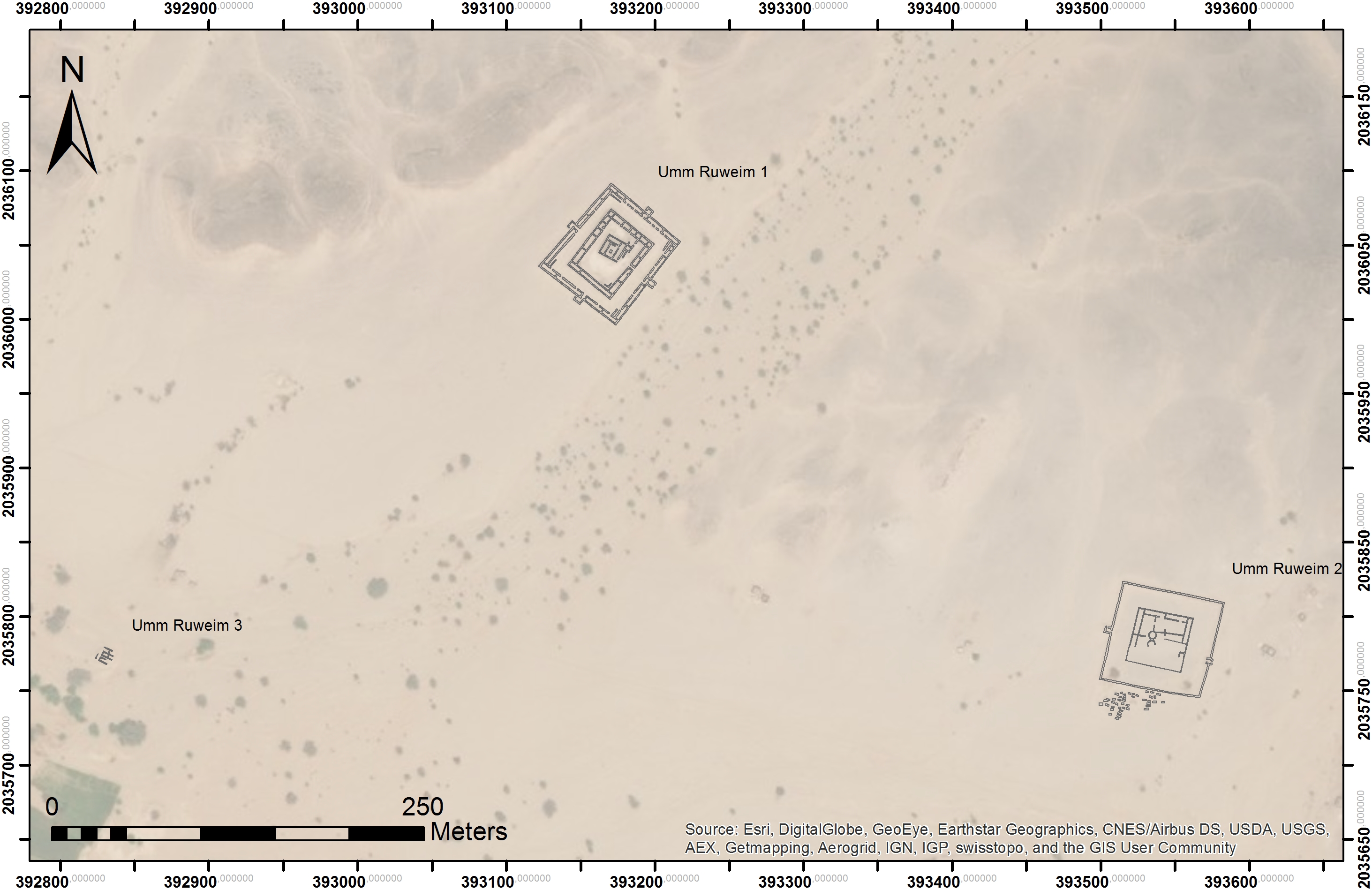 The complex designated Umm Ruweim 1 consists of two concentric sets of rooms forming rectangles which surround a central structure. The entire complex has four L-shaped entrances; three of them were subsequently blocked which left only the main entrance in the east functional. The building is constructed of dry stone walls. The ruin includes stairways at the corners of the outermost series of rooms, and three stairways or ramps can be discerned in the courtyard of the inner series.  There is also a ramp in the central structure. 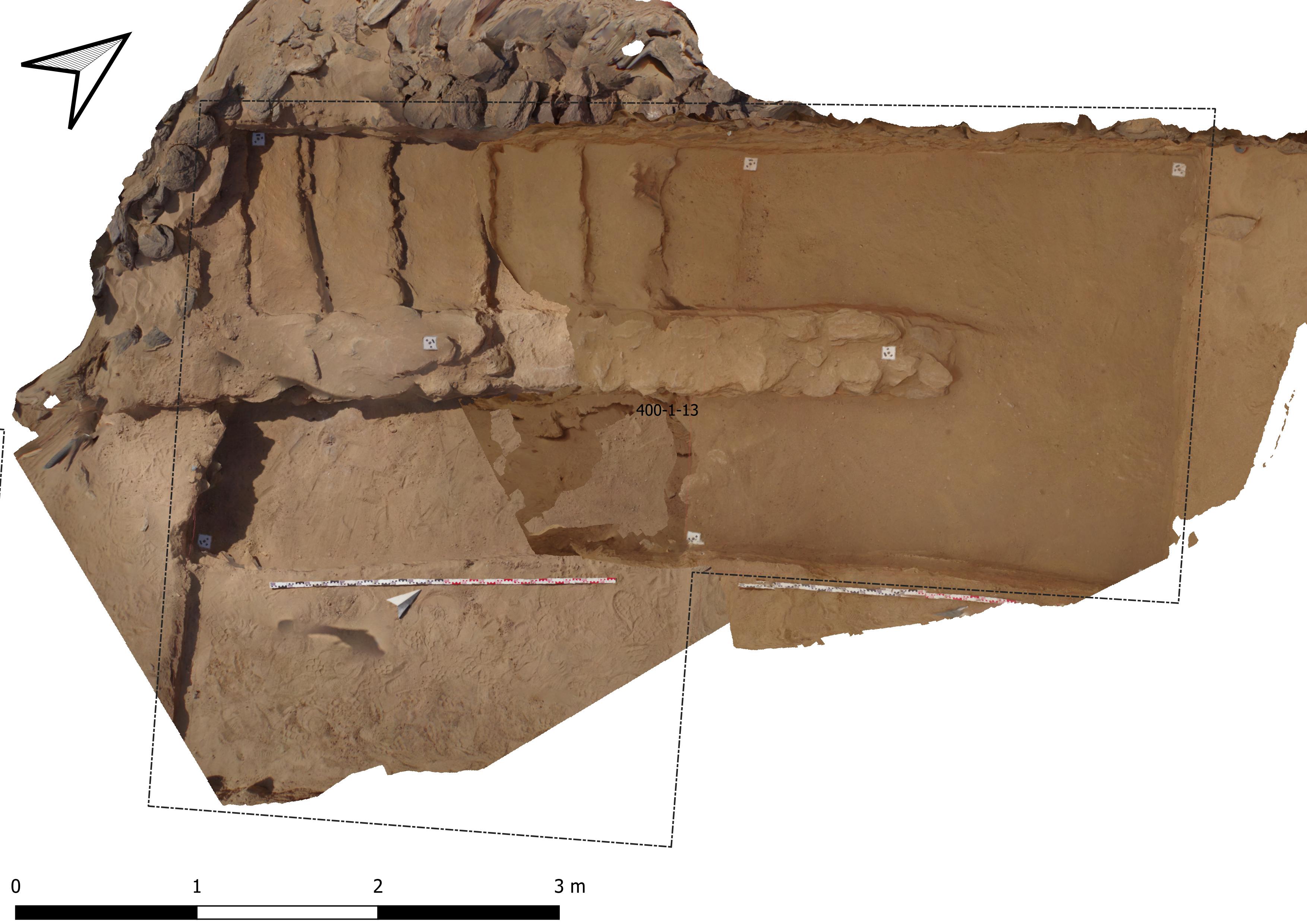 Today the courtyards are empty, but geophysical investigation established the existence of a series of regularly spaced anomalies which, at present, we interpret as pits.  One of them is surrounded by a ring wall; possibly the “pit” was once intended to contain some kind of vegetation.

The orientation of the rectangular structure in the center of the complex deviates markedly from that of both concentric series of rooms. In the courtyard of the central structure is a cube-like stone platform – an altar, the base for a throne, or something entirely different.

Both series of rooms are comprised of narrow chambers, ca. 2.2 m. in width, but the units differ considerably in depth. One room in the western part is 30 m. deep! These rooms were altered during the time they were in use; partitions were erected and doorways blocked. In the inner series all rooms, except for those to the west, have been filled in to create a raised terrace or an elevated passageway.

Everywhere there are small openings in the walls which we interpret as windows for ventilation and illumination. In the filled, inner series of rooms, larger stones block the windows. Furthermore, the walls are covered with plaster which has been renewed or improved with the addition of a second layer.

The precinct of Umm Ruweim 2 lies about 400 m. east of the complex Umm Ruweim 1. Nowadays the structure gives the impression of a dam-like stone enclosure with an area of ca. 67 x 67 m. The courtyard has centered entrances in both the east and west. Geophysical investigation could discern a structure made of mud brick (?) inside, similar to those of Umm Ruweim 1 and Quweib.

There is a cemetery with 45 “box graves” which seem to have been constructed from stone blocks of the south perimeter wall near which they are located. Even though the precise dating of this cemetery is not known, its presence suggests that the precinct was presumably erected before Medieval times and no longer in use by the Christian era.

Ca. 400 m. south of Umm Ruweim 1 lies a small mound of ruins with visible, isolated remains of walls which are reminiscent of constructions of El Tuweina. Neither the dating nor the function of the small structure to which they belong is known at present.